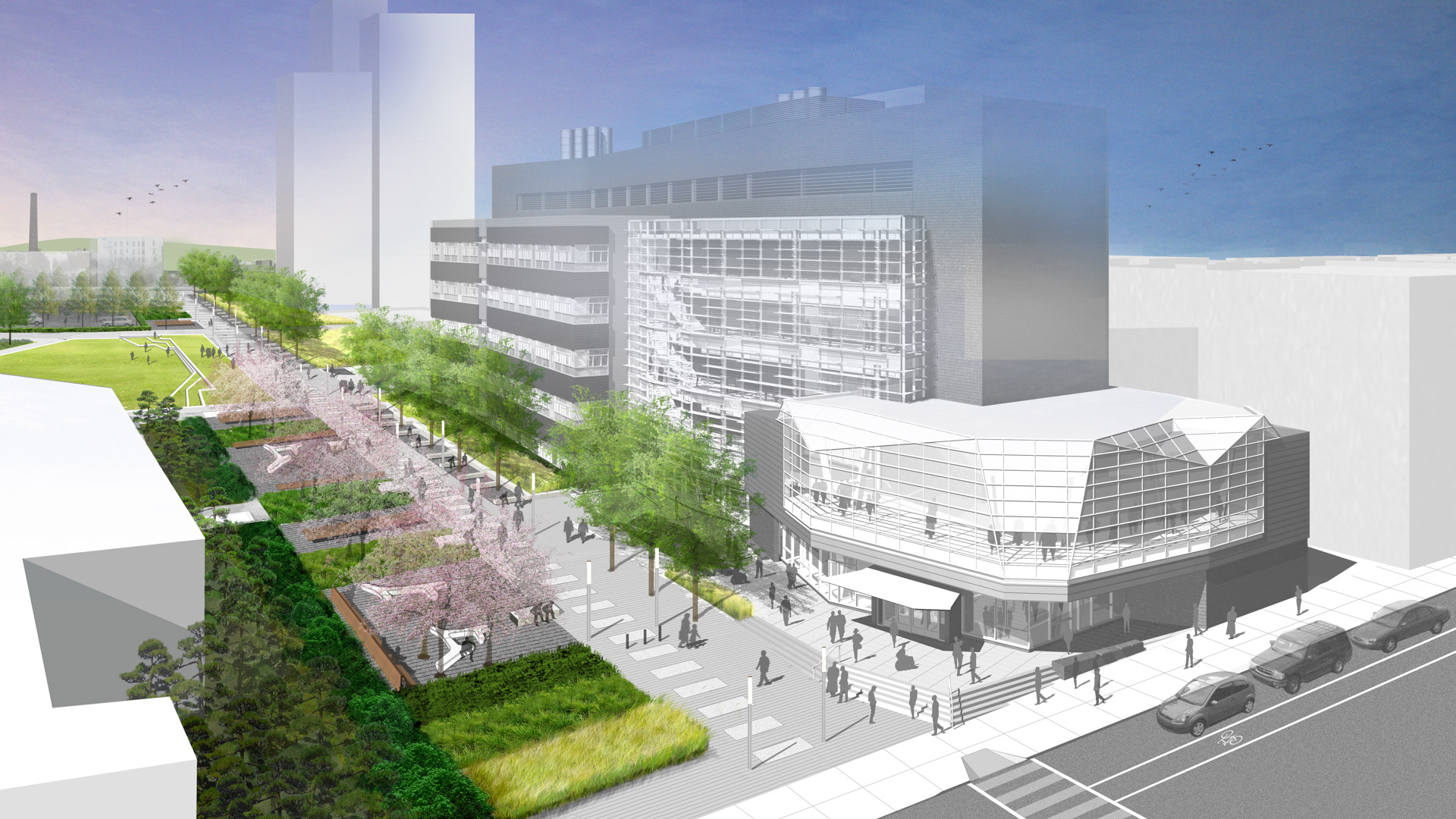 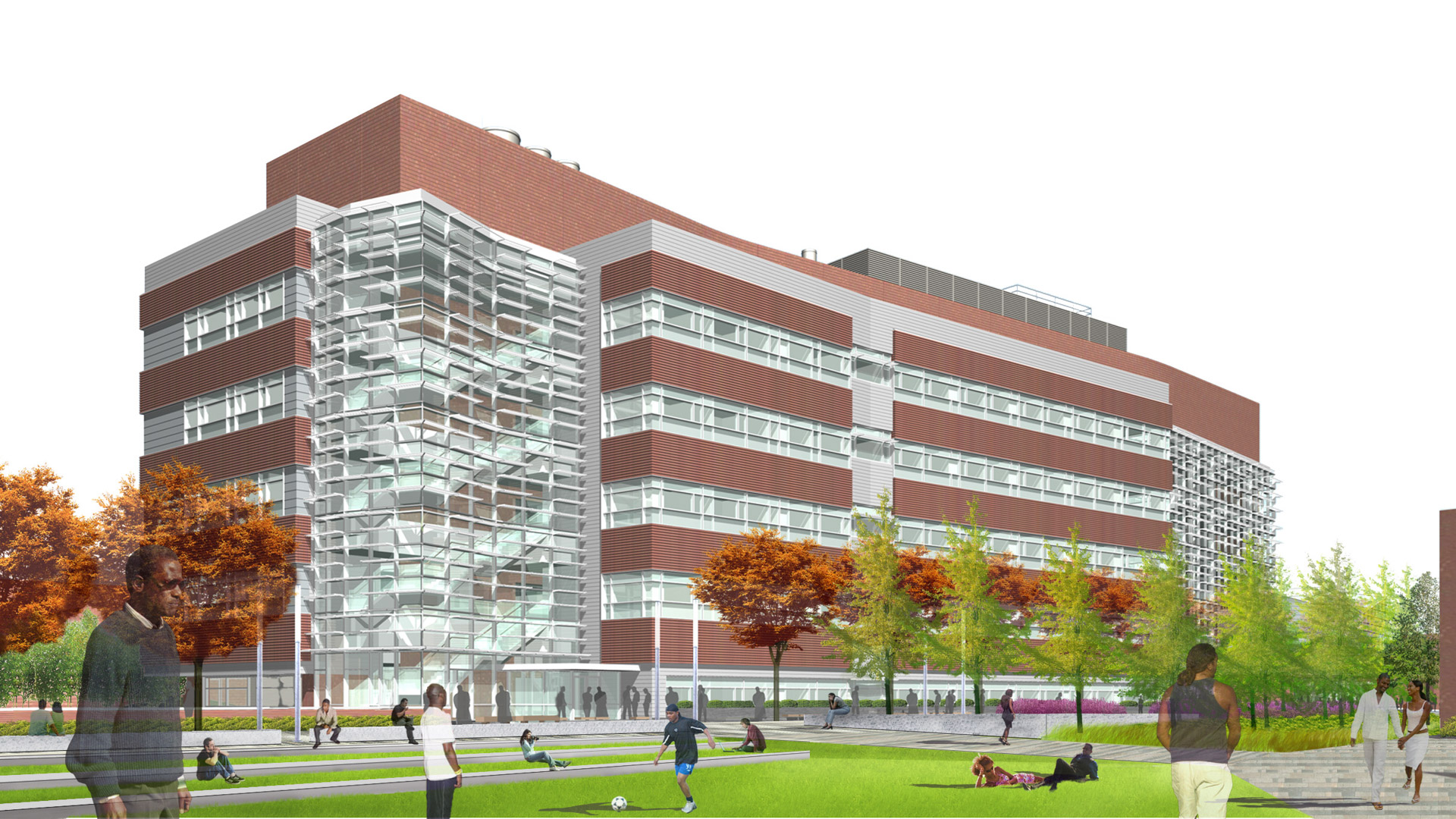 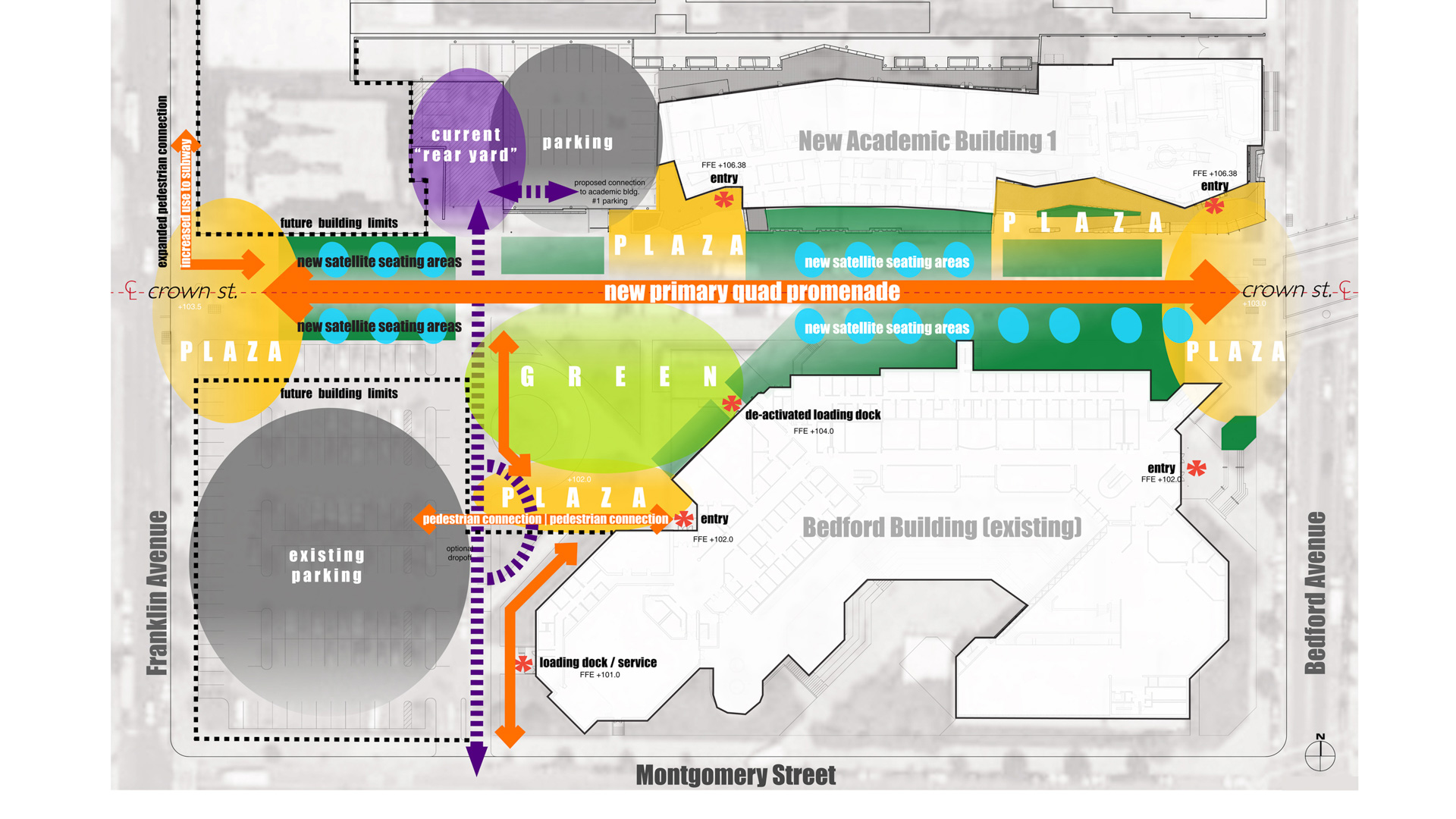 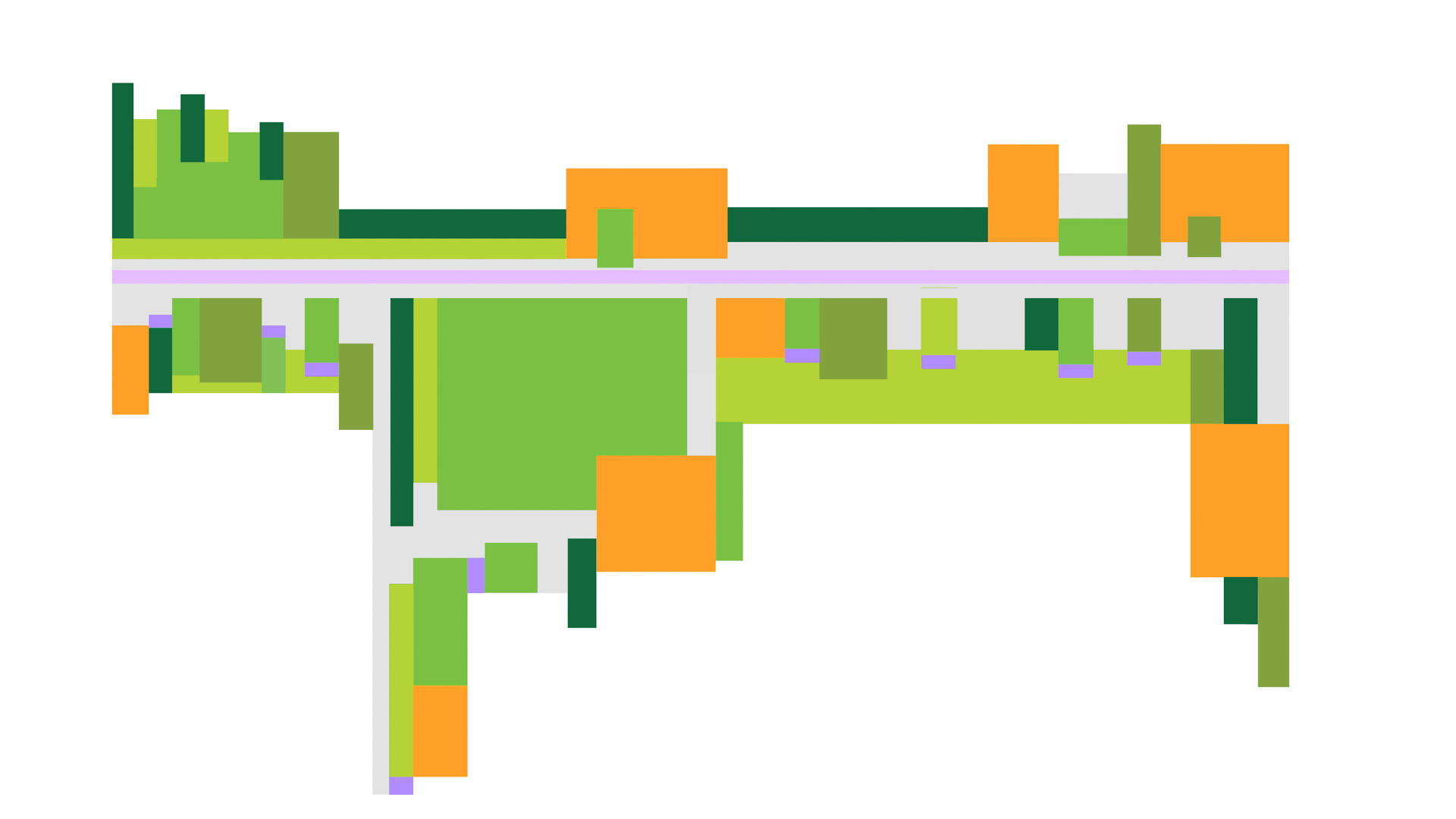 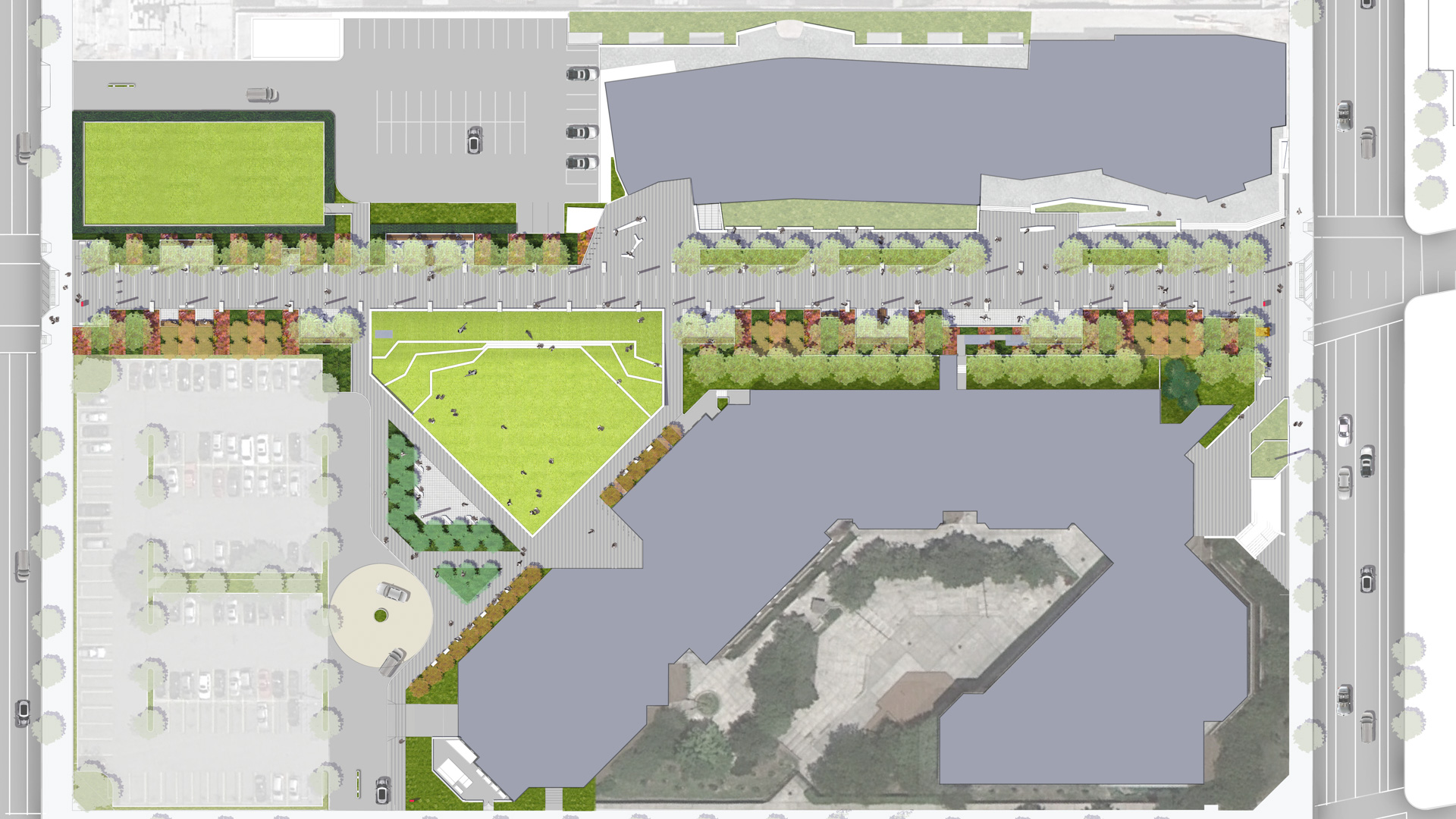 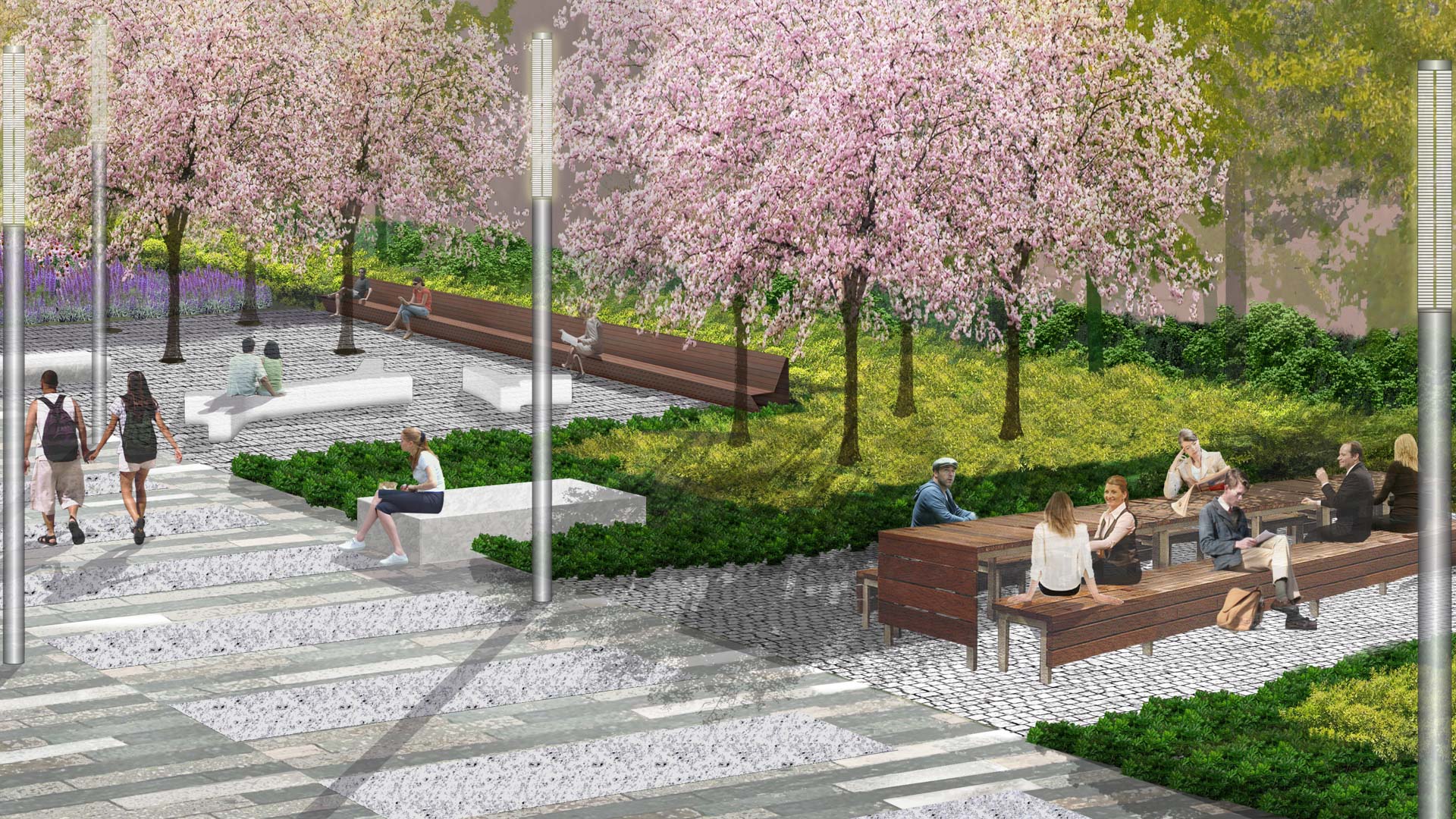 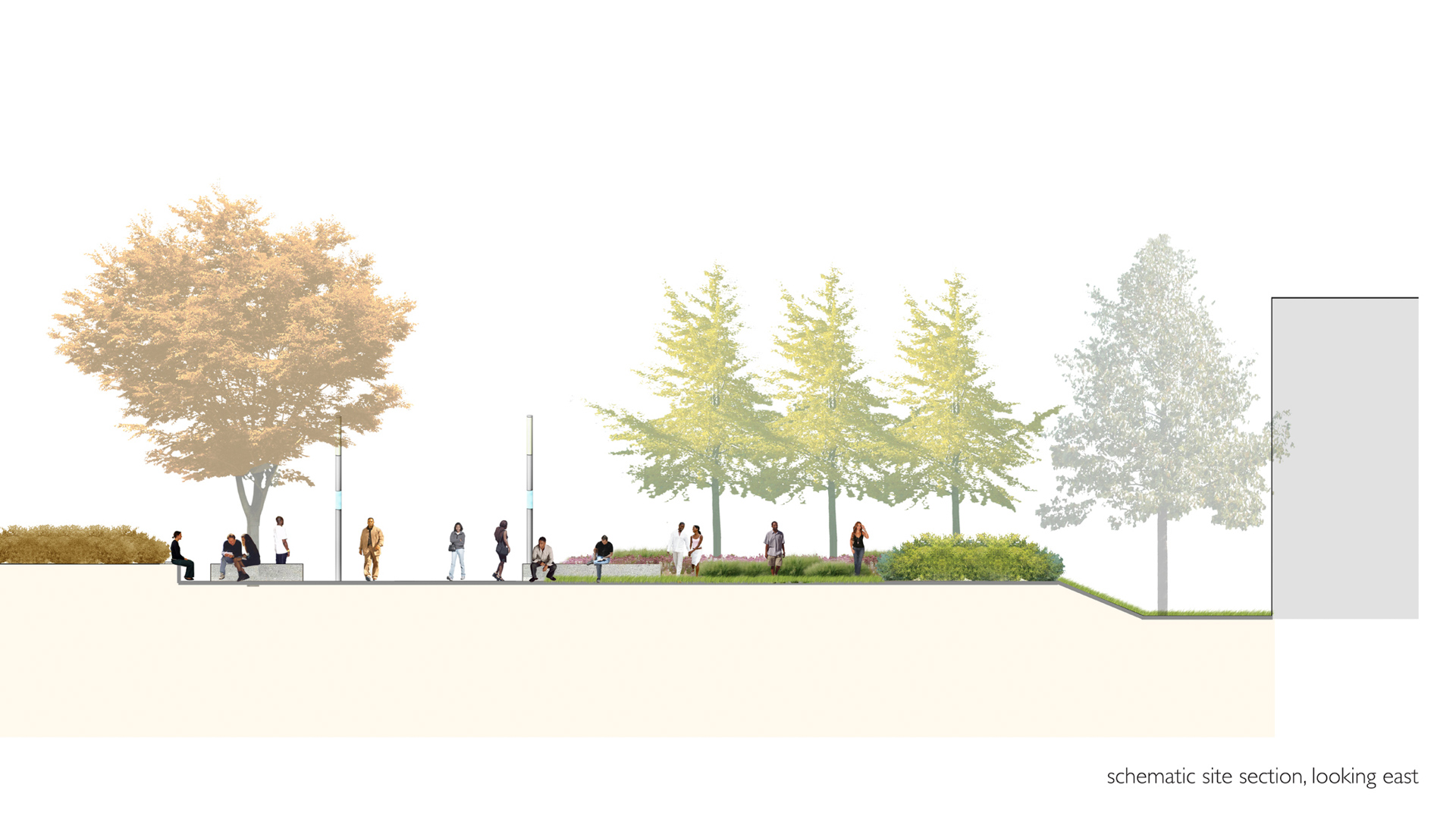 Since its founding in the 1960s, Medgar Evers College has been a central figure and source of pride for Brooklyn’s Bedford Stuyvesant community. Its reinvigoration, spurred by a rapidly expanding student body, began ten years ago with a campus master plan, prepared by Ennead Architects and Thomas Balsley Associates. In addition to new facilities, the plan foresaw a shortage of outdoor public spaces normally associated with a robust academic setting and proposed closing the street that had divided the campus. Ten years later, a capitol program provided the means by which a new central quad and promenade would replace the street and parking. With this bold urban intervention and an intense greening program, this new vision for the school’s outdoor public spaces will enhance campus life for students, faculty, and visitors.

Together with its promenade, this new quad provides a unifying pedestrian connection between Bedford and Franklin Avenues and between existing and new campus buildings, finally providing the campus with a cohesive identity and sense of place. With the dramatic transformation of street to more campus green space comes the opportunity to integrate a series of sustainability strategies into the campus environment. The carbon footprint of the campus is reduced through the implementation of porous paving, native plantings and gabion walls in bioswales, and low voltage LED lighting.

The promenade serves as an academic “hallway” and is bordered with a diverse array of seating opportunities and a series of “garden rooms” which will serve as outdoor classrooms, living rooms, study spaces, and planted gardens. At mid-point, the promenade swells into a large lawn area, a much needed center to the campus for informal academic lounging and large gatherings such as performances, festivals, and the annual graduation ceremony. To unify the hallway’s variety of spaces, a series of landscape and architectural elements is deployed, including a distinct and modulated paving pattern, plinths for seating, and light pylons with interpretive graphics that form the school’s “walk of fame.”

The programming and design of the Liberal Art Courtyards were the result of the successful landscape master plan for 322 acres, completed by SWA in 2012 and enhancing the existing campus aesthetic and experience while improving functional relationships for its students, faculty, and community. Considerations included a wealth of open spaces largely devoted to ...

This campus, like many others, has suffered from the lack of a coherent plan, rendering its campus experience to a series of passages through disconnected interstitial spaces. A key component of the landscape master plan was the identification of new building sites on campus that would shed light on a comprehensive assessment of open spaces and movement system...

The landscape is a key component of the PSAC II site. This new five hundred million dollar emergency call center is strategically located in the Bronx, New York and will facilitate emergency response for the City of New York.

An earthern grassland berm completely envelops PSAC II’s architecture and establishes a visual connection between PSAC II and the...

The new Tampa Museum of Art by Stanley Saitowitz is set within the city’s arts district whose master plan was prepared by Thomas Balsley Associates and also includes Performing Arts Center, Children’s Museum, Riverwalk, and the centerpiece Curtis Hixon Park. The museum is dramatically sited on a plinth overlooking its companion park and the Hillsborough River....

This project regenerates a spectacular, historic cliff-side waterfront site by activating it with new purpose. Working carefully to interweave layers of preservation and natural beauty, the building and landscape work together to leave a light footprint. Today, a distinctive global campus honors the history of its earlier occupation while providing inspiration...

Evolving trends in technology and the need to build a new, state-of-the-art Electronics Training Center allowed Samsung to commission the collaborative team of Samoo Architects and Thomas Balsley Associates for the design of their new facility in Keyonggi-Do Province in Korea. Essential to both Samsung and the design team was a site design solution that would ...

The new Tampa Museum of Art by Stanley Saitowitz is set within the city’s arts district whose master plan was prepared by Thomas Balsley Associates and also includes Performing Arts Center, Children’s Museum, Riverwalk, and the centerpiece Curtis Hixon Park. The museum is dramatically sited on a plinth overlooking its companion park and the Hillsborough River....