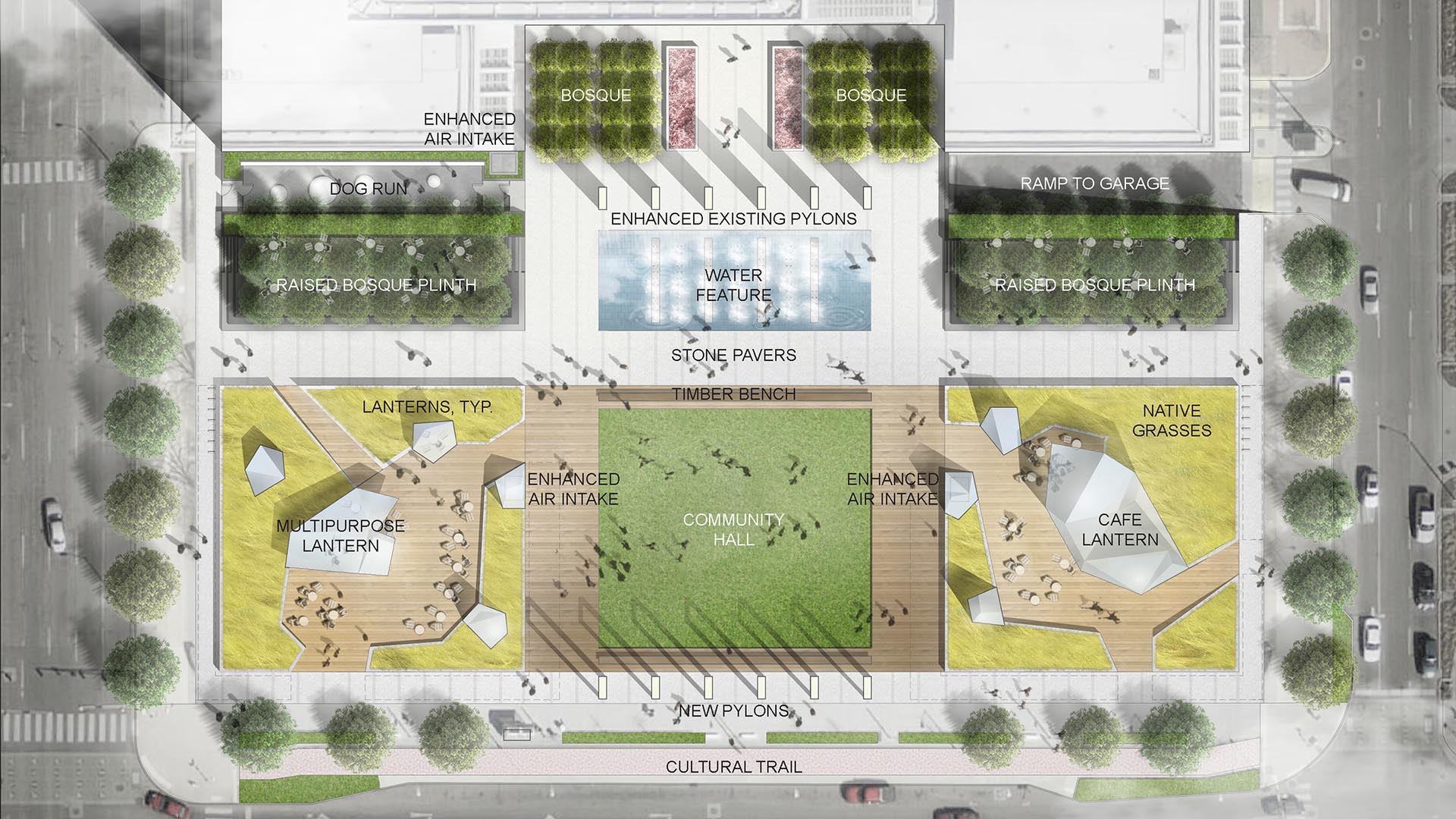 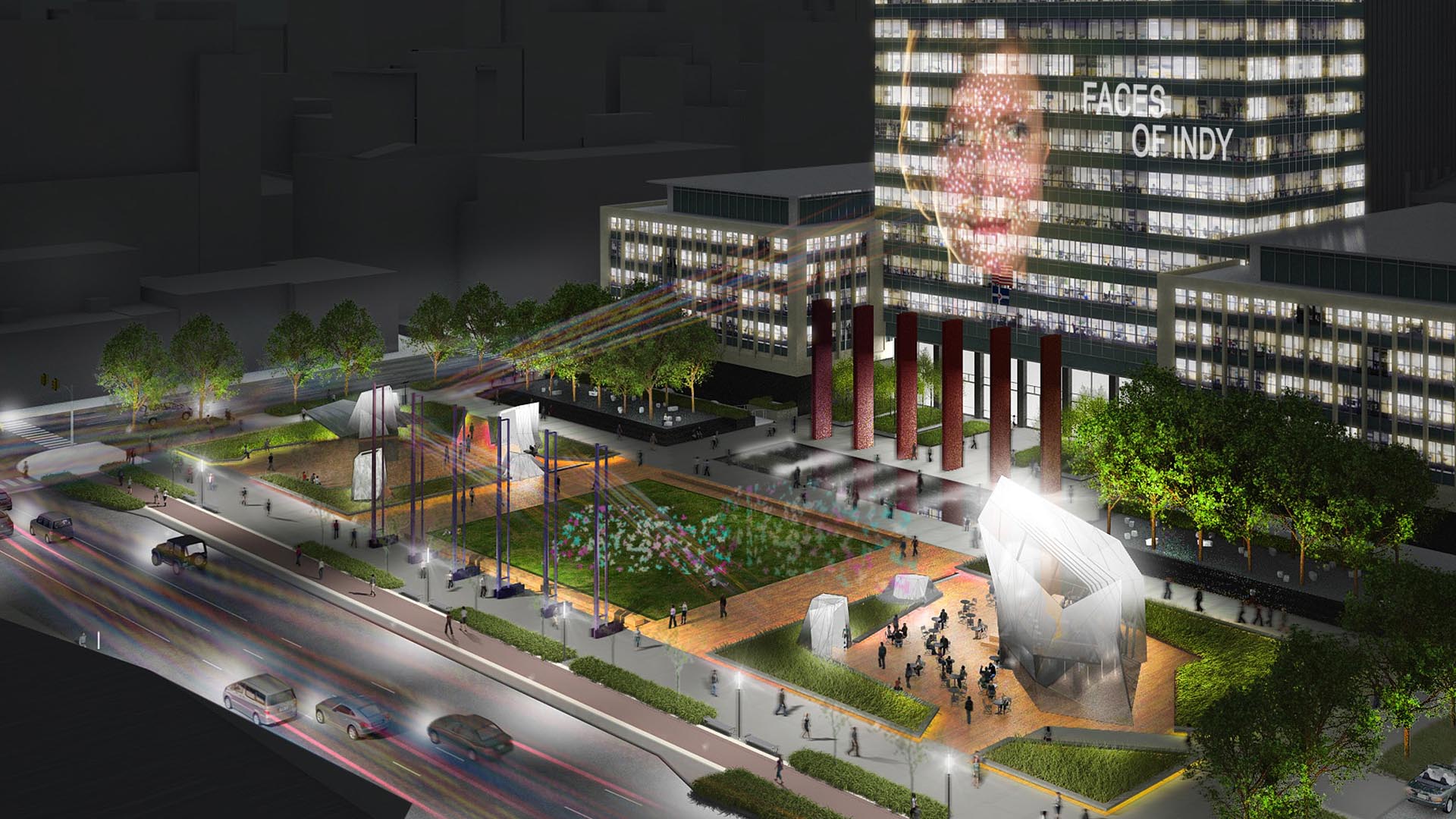 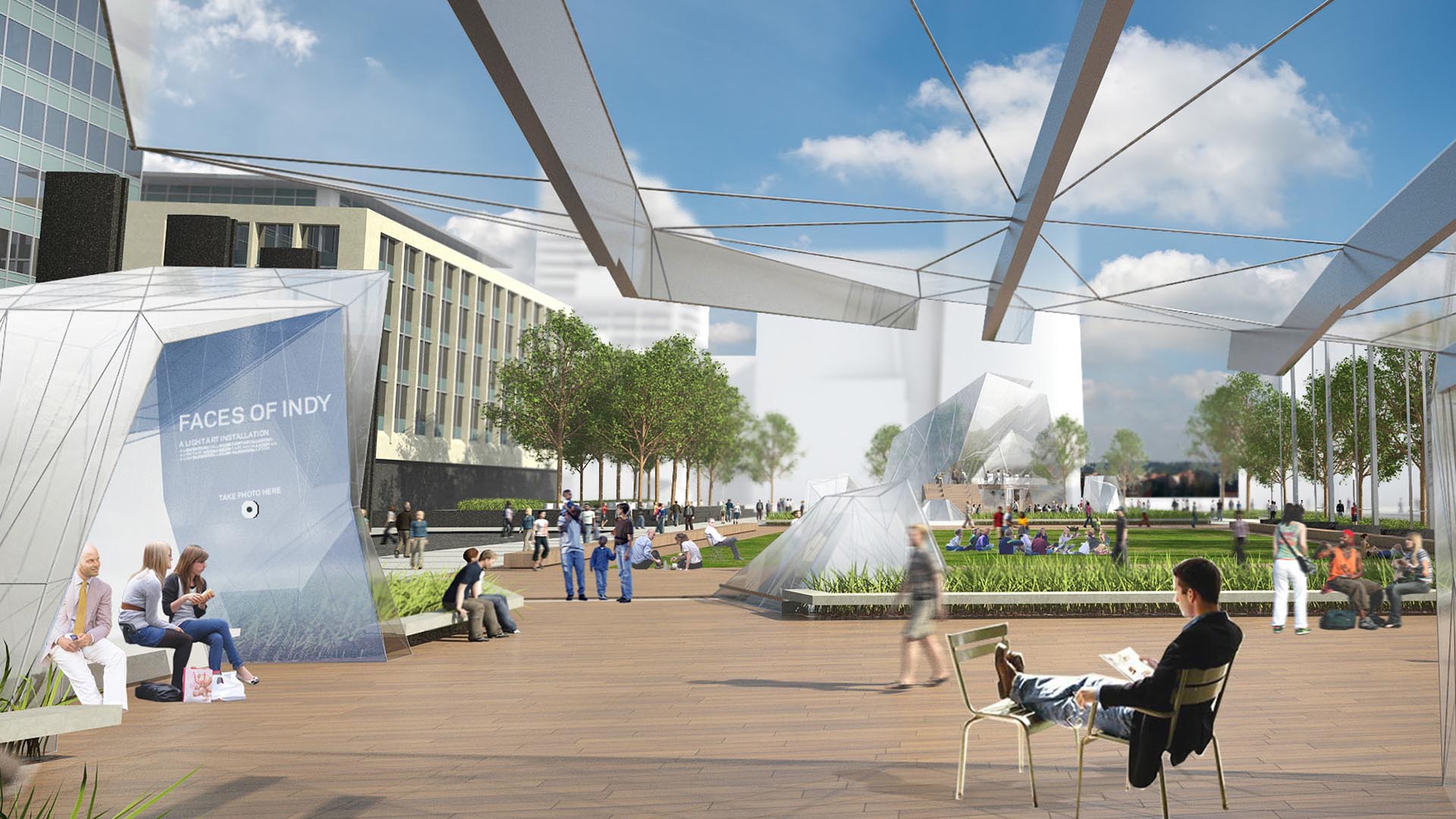 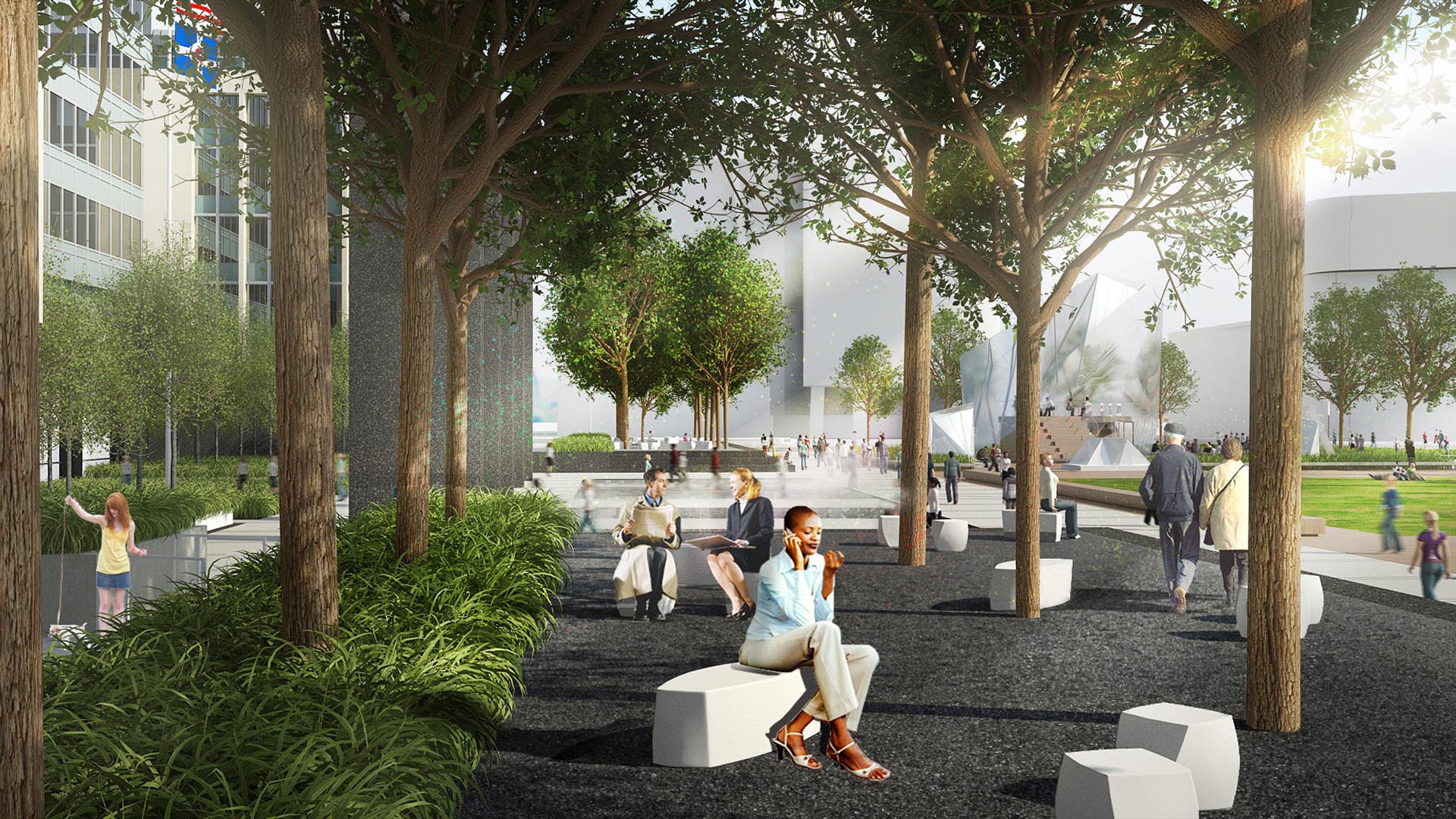 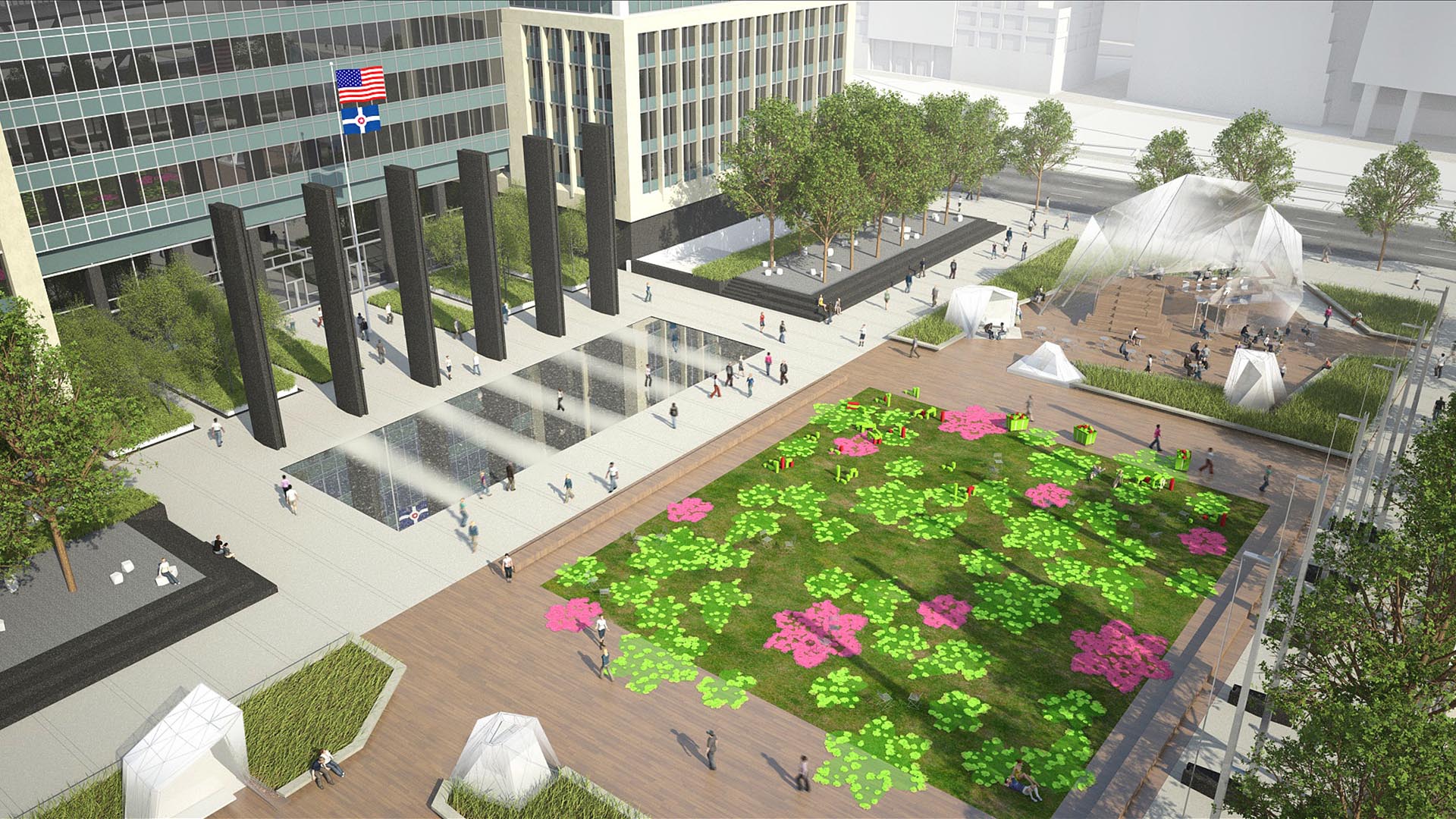 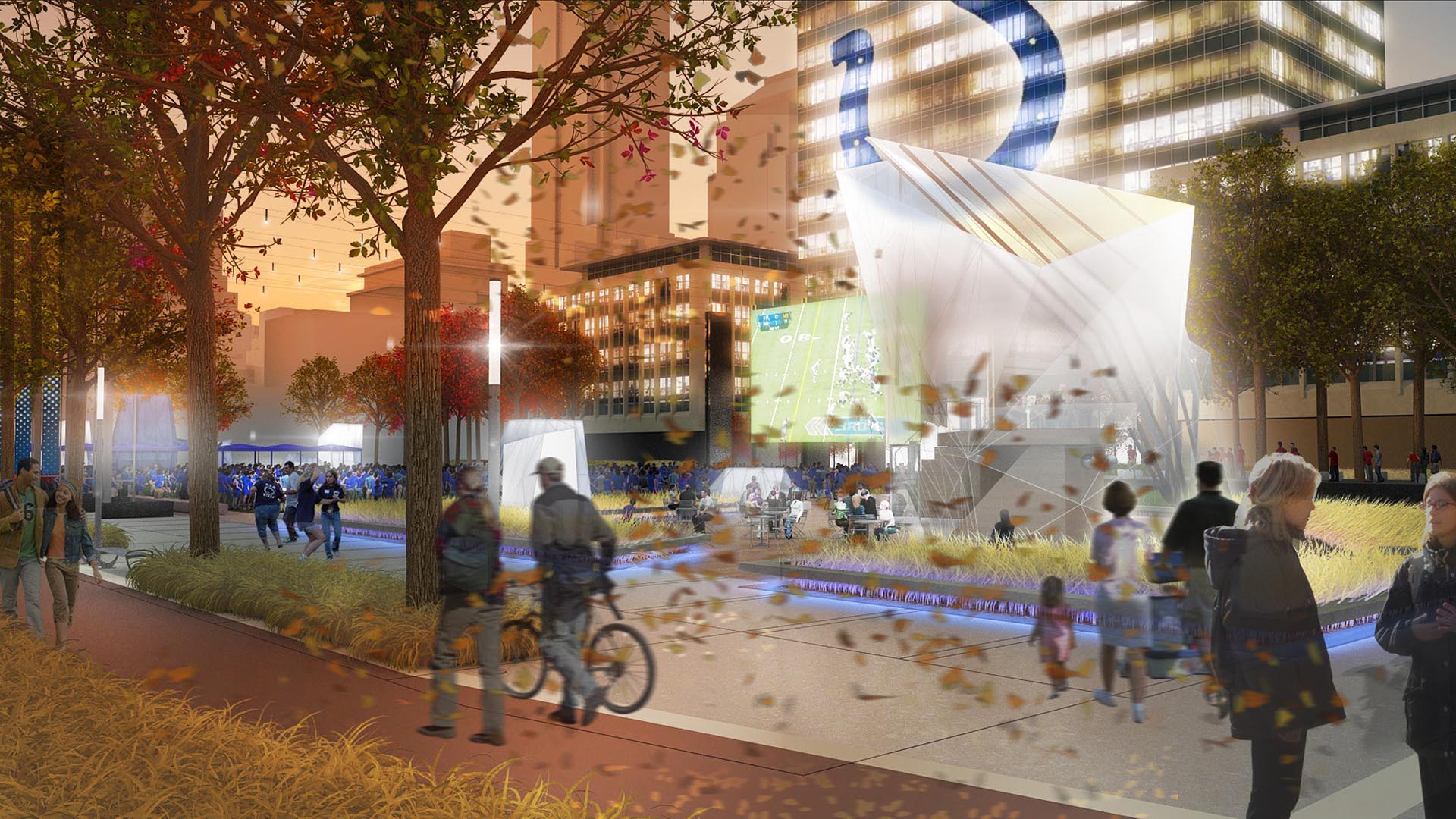 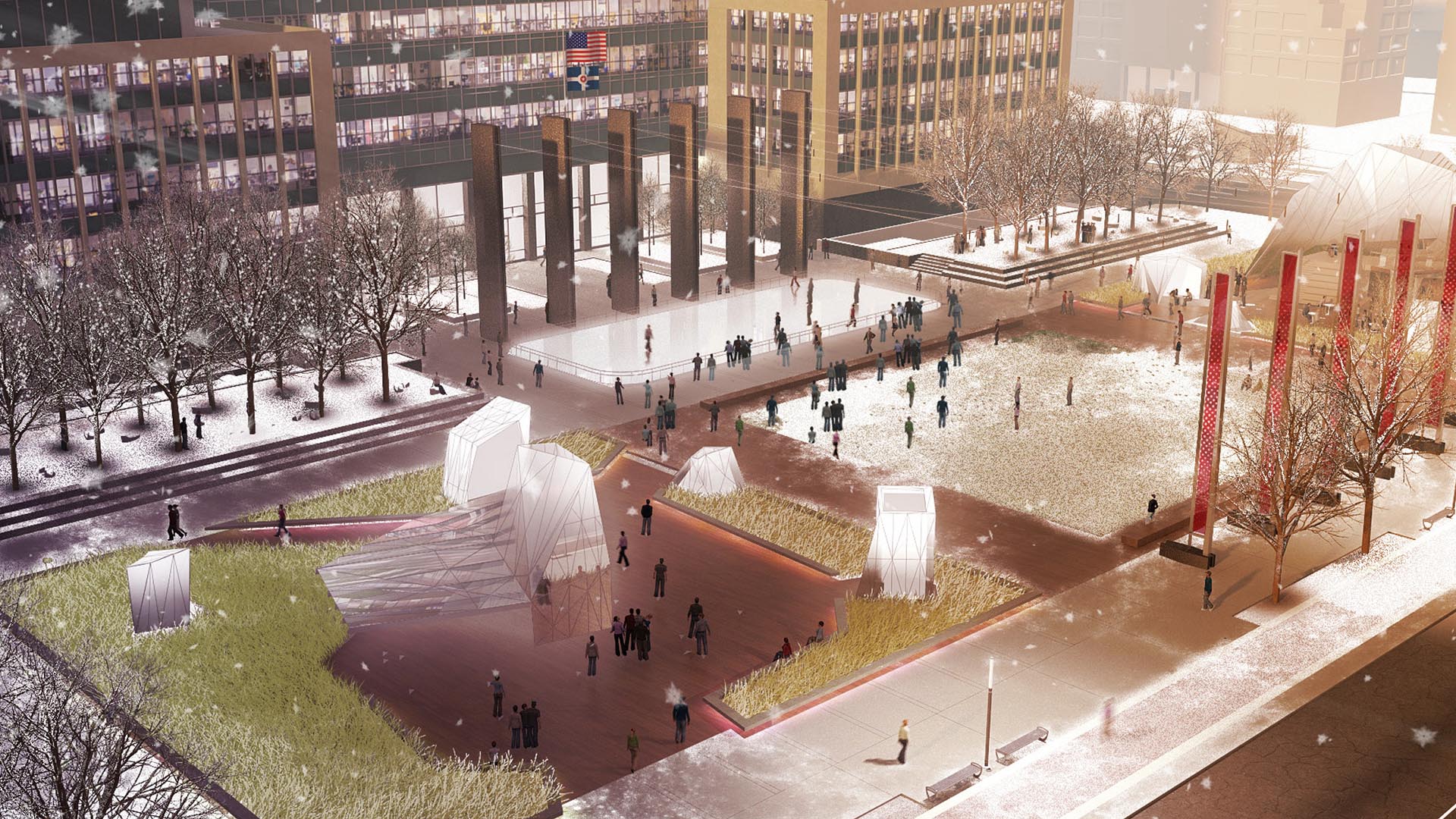 SWA/Balsley, in collaboration with Ratio Architects, submitted this competition entry for the redesign of the Indianapolis City/County Building Plaza. We shared the competition committee’s vision of a world-class, 21st- century civic public space with the right ingredients to stand amongst the world’s best public spaces. The design concept builds upon the foundational underpinnings of the site’s historical public use as a hall for justice and democracy. Youthful democratic ideals of ideals of justice, freedom, and equality are often articulated by symmetry, great open lawns, and monuments. Public spaces are both symbolically and functionally a place where everyone has an equal right to participate. Within this framework is the idea that there is room for improvisation, variation in perspective, and also a role for inspiration. Faceted “lanterns,” representative of the diversity of society, are rooted within planes of native prairie grasses, representing the structural foundation from which society thrives. Symbolic of the purity of the white light of justice, the lanterns, which utilize integrated photovoltaic glass to reduce energy demands, cast a dramatic glow. Using high-efficiency, color-changing LEDs, the lanterns can be programmed to enhance the plaza’s ambiance with dramatic effect, establishing an “Indy landmark” at the center of the Market East district.

The largest of the lanterns, a cafe pavilion, will serve food and beverages for park visitors. The two-story pavilion provides perched views and an oasis from the street. In addition to providing wifi, seating, heating lamps, and a place to charge mobile devices, the smaller lanterns are part of an art light installation dubbed the “Faces of Indy,” which celebrates the people of Indianapolis. Like a civic photobooth, visitors are encouraged to interact with the lanterns; their photo is later projected onto the façade of the City County Building. The existing plaza’s black granite is salvaged and repurposed throughout the park, notably as a raised bosque plinth. Reminiscent of civic formality, the plaza’s plinths are planted with shady bosques of native Indiana trees, and provide a transition from the building symmetry to the less-formal character of the plaza. Below the plinths, rainwater-harvesting cisterns sustainably supply the water feature, flushing café toilets, and landscape irrigation.

Westmoor Park is a 168-acre educational and recreational setting where visitors are encouraged to experience the natural world about them with the guidance of interpretive personnel. The park includes four separate areas, one of which is an Administration and Reception area with facilities for drop-off, group orientation, and parking. The Natural Science and E...


Description: SOM invited Thomas Balsley Associates to join their team for the design of the new LG R&D Science Park. Since LG’s mission is to “innovate through harmony and dignity” for customers and employees, the LG proposal incorporates a park that connects the R&D creates a harmonious synergy between LG and the adjacent community.
Architectu...

Situated along Moscow’s Ring Road and adjacent to the legendary Paveletsky Station transportation hub, the park at Paveletskaya Plaza will both cover and reveal the new bustling underground retail facility below while also serving as a landmark destination for residents and visitors alike.

The extraordinary retail and architectural vision for Paveletska...

The threat of global warming prompted the government of Korea to develop the country’s first national center of ecological research. After selecting a site, the government conducted an international design competition, in which the team of Samoo Architects and Thomas Balsley Associates won first prize. This 189-acre park will combine public and private researc...

As one of the six mega-project sites known as the Han River Renaissance Plan, the city of Seoul Korea is transforming the 300-acre Magok site of ex-urban sprawl and marginally productive agricultural land into a new major metropolitan park thematically focusing on history and nature. With over 300 entries worldwide Thomas Balsley Associates, in collaboration w...

The deep forest is nature’s supreme garden, sacred ground filled with the sights and sounds of life. Our native forests have been the sites of a 200-year-old clearing party whose hangover is still being felt. Very few of us have witnessed these sites to sense the magnitude of their destruction or their rebirth as represented by masses of seedlings, in a strugg...


Description: SOM invited Thomas Balsley Associates to join their team for the design of the new LG R&D Science Park. Since LG’s mission is to “innovate through harmony and dignity” for customers and employees, the LG proposal incorporates a park that connects the R&D creates a harmonious synergy between LG and the adjacent community.
Architectu...